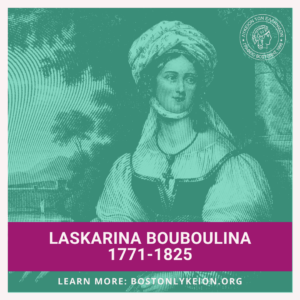 Laskarina Bouboulina was born in 1771, with the spirit of revolution in her blood, in an Ottoman prison. Her father was imprisoned for participating in a previous Greek uprising. He died shortly after her birth and she never forgot why she was raised without him. She grew up in Hydra and moved to Spetses when she married. Her first husband was killed by pirates, and her second husband befell the same fate. Both her husbands worked as traders, amassing great riches. As a wealthy widow, she continued to build up her fortune, becoming so affluent that the Ottoman authorities eventually took notice. They attempted to confiscate her funds, and so she made her way to Constantinople. There, she befriended the mother of Sultan Mahmud II, who interceded on her behalf.

She was able to keep her riches, which she used to build ships for the Greek fleet. She managed, through lies and bribery, to build the fleet’s largest ship, the Agamemnon. In March of 1821, she sailed for Nafplio to attack the Ottoman stronghold there. Quickly realizing that the city could not be taken by sea, she set up a blockade which lasted for a year and a half. While the blockade was underway, Bouboulina went to Tripoli just as the city fell. In the chaos, she headed for the local Pasha’s harem and protected all the women within it, possibly remembering the kindness shown to her by the sultan’s mother.

After the fall of Nafplio, Bouboulina relocated to the city. Once the threat of the Ottomans had lessened, the Greeks splintered into smaller groups vying for power. Bouboulina was caught in the middle. She returned to Spetses, and prepared for renewed fighting with the Ottomans. Her life was tragically cut short in May 1825, at what should have been a happy time. Her son eloped with a local woman, whose father was displeased with the match. He led an angry mob to Bouboulina’s home, and as she defended her son, a shot rang out and hit her in the head. With that, this heroine of the Greek Revolution, a woman who fought and gave everything for the liberation of her brethren, died instantly.

Bouboulina not only fought bravely, leading the blockage against Nafplio, but used her fortune to help ensure the liberation of Greece from under the Turkish yoke. Without her financial and material contributions, the Greek cause may not have been able to get off the ground when it did. She also showed that women could play a valuable and integral role in the battle for independence. It wasn’t until 1946 that the Hellenic military allowed women to serve as Nurse Corps Officers. Bouboulina was a woman before her time. 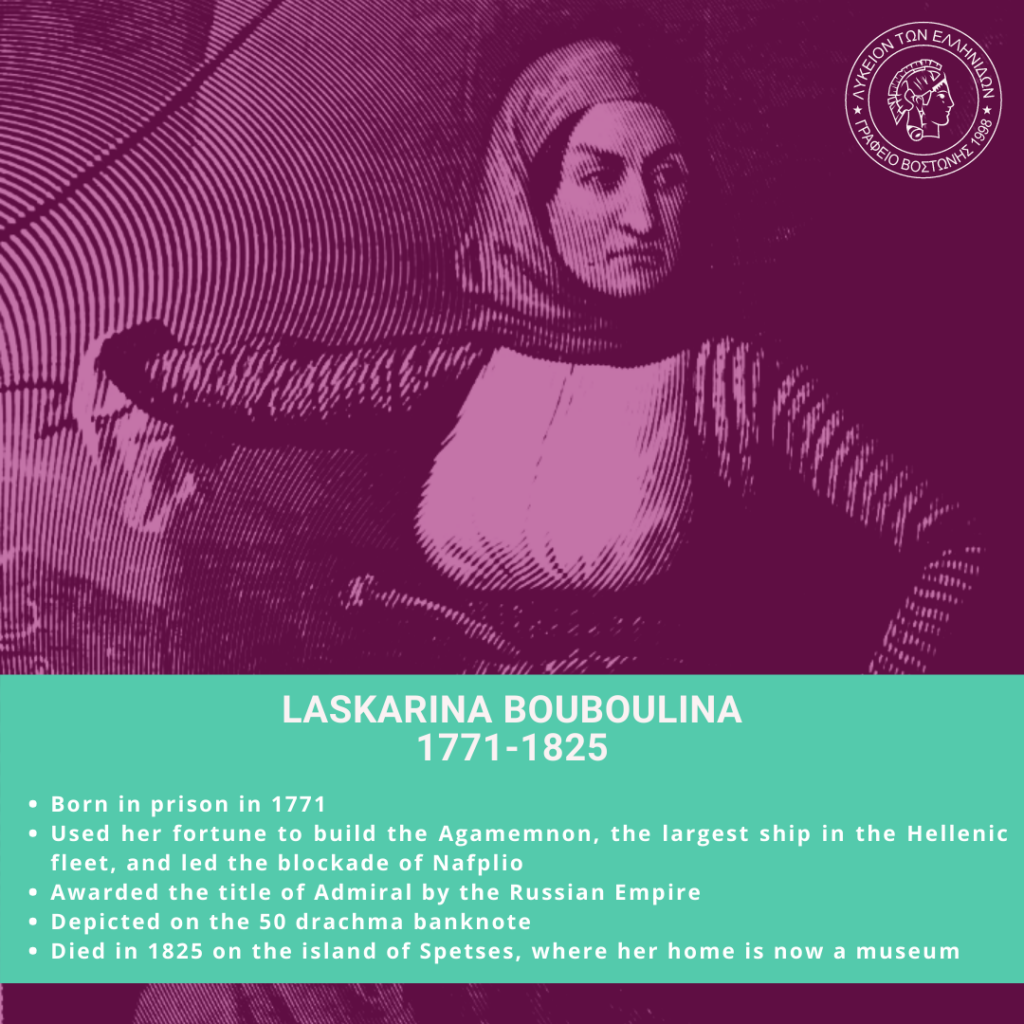 “On This Day in 1825 Laskarina Bouboulina Passes Away,” Greek City Times