Life in the time of the Greek revolution and onward: what do traditional, demotic, Greek folk songs reveal to us? Along with this, what is the place, the role, the perception of women in these songs? 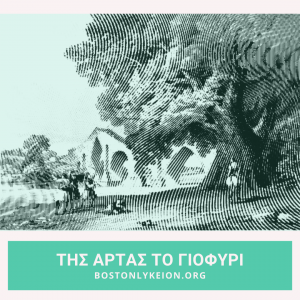 This folk song is known throughout Greece. There are over 300 records of variations of the song.

Arta is a city in northwest Greece, in the region of Epirus (Ipiros). As with most of the central mainland, the region, which includes the Zagoria in the east, is rocky and mountainous. Throughout the Ottoman era, Ipiros was the predominant birthplace of important builders from Northern Greece who made churches, monasteries, mosques, stately homes, fountains, mills and houses. With plenty of stone to be found, traditional buildings made of stone were prevalent. In the time of Ottoman rule, labor on public works was done by locals as chores. They worked alongside artisans who specialized in building stone structures. These were local or itinerant builders organized in companies. Those who attempted long journeys were mainly from Ipiros. They eventually moved on to the Peloponnese, Romania, Egypt and Persia.

The main architectural feature of the stone bridges is the arch, singular or in multiples. The bridge of Arta is one of many such distinctive, famed bridges of the area. It is best known not for its beauty, but as a masterpiece of Greek traditional architecture and a significant landmark of the region. It is a footbridge born of four large semicircular asymmetrical arches and three smaller ones, all with different diameters and all set on pillars. The groundstones are simple large stones, indicating that the initial foundation must have been dredged in the Hellenistic period, 3rd century BC. The collapse of such bridges was usually due to poor foundation work, and in this case, the ancient foundation having been laid on the unsuitable loose soil of the plains, subject to rainfall and flooding. The method of building the version of the bridge that stands today was prevalent in the Ottoman era, dating back to the first decade of the 17th century. Work was done probably on the same spot where its largest arch previously had collapsed and had to be rebuilt.  For the large arch only, for the overwhelming difficulty of its reconstruction, considering the materials to be used, the forces of nature to contend with, the engineering involved, it is believed that workers and apprentices needed around three years to complete.

The bridge of Arta became famous because of the legend that the project inspired. The song “The Bridge of Arta” (“Tis Artas to Gefyri”) tells that although 45 builders and 60 apprentices worked all day to build the bridge, every morning when they returned the bridge had collapsed. From ancient and Byzantine times the belief was held that in order for any construction to be secure and protected from danger, it was necessary to sacrifice the soul of a living creature in its foundation. (Immurement was a common motive in the folklore of all Balkan peoples.) The only solution here could be, then, to sacrifice the master builder’s wife by burying her alive inside the structure. The victim’s powerful soul would then gain supernatural strength and become the guardian spirit of the bridge, protecting it from all harm. Correspondingly, the sacrifice of the master builder’s wife, a human and a WOMAN, was the greatest that could be made.

The answer to the question of why it is always that women are sacrificed is not that women are expendable, but because they are the most powerful beings. Women have access to the mystical forces of nature: birth/death.

The song brings forward philosophical themes still relevant and applicable to experiences today — frustration of failure to carry out a significant task, the struggle between personal loyalty (husband and wife) and public duty, the reciprocal nature of sacrifice, misfortune, tragedy and despair, destiny, revenge, compassion, trust, inner courage. It’s not about having control over things that happen, but how we react to them.

In reference to the song, there is a saying used today to characterize a project that takes way too much time to be completed: “What you/they build all day, is destroyed every night”.

The text that follows is the Corfiot version from the publication The Songs of the Greek People (Nikolaos G. Politis, 1914).