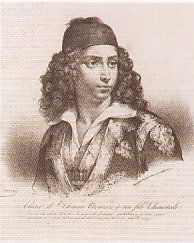 Domna Visvizis was from Aimos, a maritime city in Eastern Thrace. Coming from a wealthy family, she married the wealthy ship owner and brave energetic visionary Antonios Visvizis who was one of the first members of the “Filiki Eteria”. Domna herself later was initiated into the secret association.

At the outbreak of the revolution, the Turks attacked and ravaged Eastern Thrace (it being close to Constantinople). Without a second thought, Antonios and Domna loaded their best ship, “Kalomoira”, with women, children, icons, money, jewelry, and everything else that could be carried, armed it for war, and sailed to the Aegean. Domna was the “Sympolemistria”, co-captain to her captain husband. She is known to have declared, “We do not regret spending money, since it will be used to build the golden palace of liberty”. Many victorious battles ensued aboard the Kalomoira, which the Visvizis with their 5 children called home. 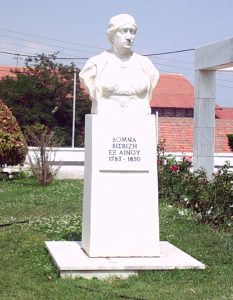 On July 21, 1822, Captain Visvizis, led a fleet of 30 ships in a great battle in the Maliakos Gulf, during which and in front of Domna’s eyes, he was shot and killed. Domna immediately took command as captain of their ship. A gifted and capable naval fighter, Domna was well respected and trusted by her crew and allies. She was known as the chief captain and noblewoman of Thrace. Crossing the Greek seas and engaging in battles, the “Kalomoira” instilled terror and fear among the Turkish fleet. It was used to fire upon the Turkish positions but also to carry ammunition and food supplies to the Greeks. When Domna’s wealth became depleted and she could no longer provide for its maintenance, she gave it to the Greek government to be used as an artillery vessel. In this capacity, in 1824 the “Kalomoira” set fire on and sank the Turkish ship of Hazne Gemnisi.

Afterward, Domna went to live first in Nafplio and then in Ermoupoli. Very poor, she sought financial assistance from the Greek government to support her children. During the last years of her life, we find her in Piraeus where she died in 1850 at the age of 67, in a small hut next to her beloved sea. Not unjustifiably, Domna was later characterized as the “Bouboulina of Thrace”. Her statue adorns the lighthouse square of Alexandroupolis. 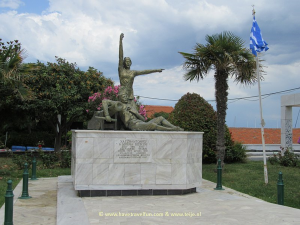 Lyrics to the song: